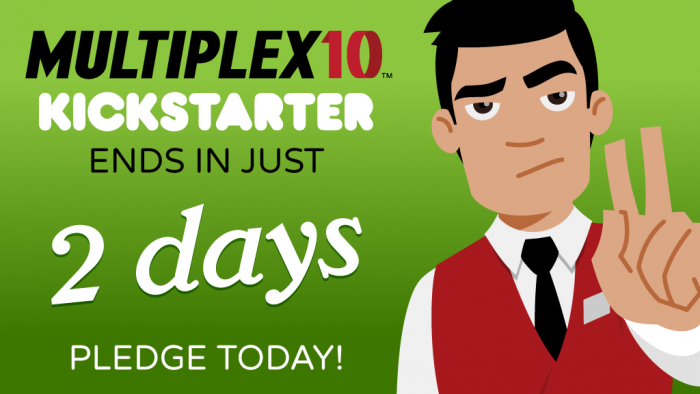 The Multiplex 10 Kickstarter project ends in TWO DAYS. (Sunday, May 7th, at 11pm Central, to be precise. Kickstarter rounds down.) Right now, we’re thisclose to $17,000 — nearly 40% of the way to our first and only stretch goal (so far).

I wanted to help encourage a few Multiplex readers who loved the webcomic but haven’t pledged to support the animated short by adding a new reward onto that $20,000 stretch goal: a Multiplex 10 comic ebook free to all $25+ Kickstarter backers. I’ve run a few “story comics” over at the Multiplex 10 site (two of which also ran here), and I will be a few more of those no matter what, but this stretch goal/reward will add even more new comics and make the ebook into essentially an “episode zero” of the animated series.

It will be at least 16 pages long, with the existing comic strips and new material  slightly reformatted into a single, continuous story rather than a collection of comic strips like the Multiplex Chapter eBooks.