AND the animated short has been officially selected by the Mindfield Film Festival!

AND The Daily Fandom gives Multiplex 10 a ★★★★★ review! — “It was an enjoyment to be related to every single character in their own way. This series is going to change the game of animated series, in a good way.… Multiplex 10 is a must watch for any film buff, animated buff, or anyone who genuinely loves good producing and directing.”

AND I chatted with the No Coast Cinema podcast about the animated short, the dearly missed comic strip, and more! 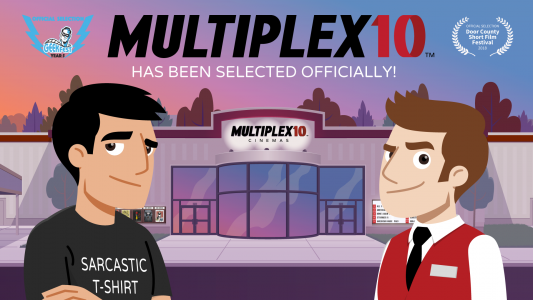 MULTIPLEX 10 is an animated comedy short that centers around the lives of the movie-loving and customer-weary staff of the Multiplex 10 Cinemas. Kurt is an usher, pining for that special someone to share his love of horror movies. The newest hire, Jason, is a film snob who just needs a freakin’ job, okay? Despite their differences, the pair will make fast friends — unless they kill each other first.

A Chase Sequence and Strangewaze film, MULTIPLEX 10 is coming to Vimeo On Demand at MIDNIGHT Eastern on January 29, 2018. You can pre-order it through Vimeo On Demand NOW.

The Multiplex 10 Indiegogo Second Chance campaign is almost over! The $2,000 goal was intended to fund the production of Multiplex 10 USB cards pre-loaded with the short, help cover film festival submission fees, and also give us a little extra funding to promote the short film.

We’ve ended up raising over $4,000 from over 100 Indiegogo backers — and counting — which has added a director’s commentary audio track to the digital download for eevvvveryone and provided enough extra funding that we can promote the short with some all-new Multiplex 10 animated mini-episodes. These “webisodes,” as I’m calling them, will be posted free online all over the place (at least at first).  In other words, Multiplex 10 is now a web series!

Now, to be clear: we’re going to start small. While the second stretch goal for the Indiegogo project includes at least one 2–3 minute webisode, that isn’t necessarily the one we’re going to do first. (But we will get to it in 2018!)

Tom is getting a new mic so that his audio quality sounds better than in the video above, and I need to pick up on some tricks in order to very quickly make decent-looking animation, so that the movie jokes we come up with are as timely as possible. Things will probably look and feel a lot like… well, this video here, or some of the really early Multiplex comic strips. This is a fairly different format from the animated short, so we want to get our feet wet before jumping in.

Thank you so much to everyone who has supported the short film and either of the crowdfunding campaigns!

There is still time to back the project! It ends TONIGHT (FRIDAY) at MIDNIGHT PACIFIC TIME (a.k.a. Saturday 3AM Eastern). Every additional dollar helps with the release and promotion of the short, and with the production of the upcoming webisodes.