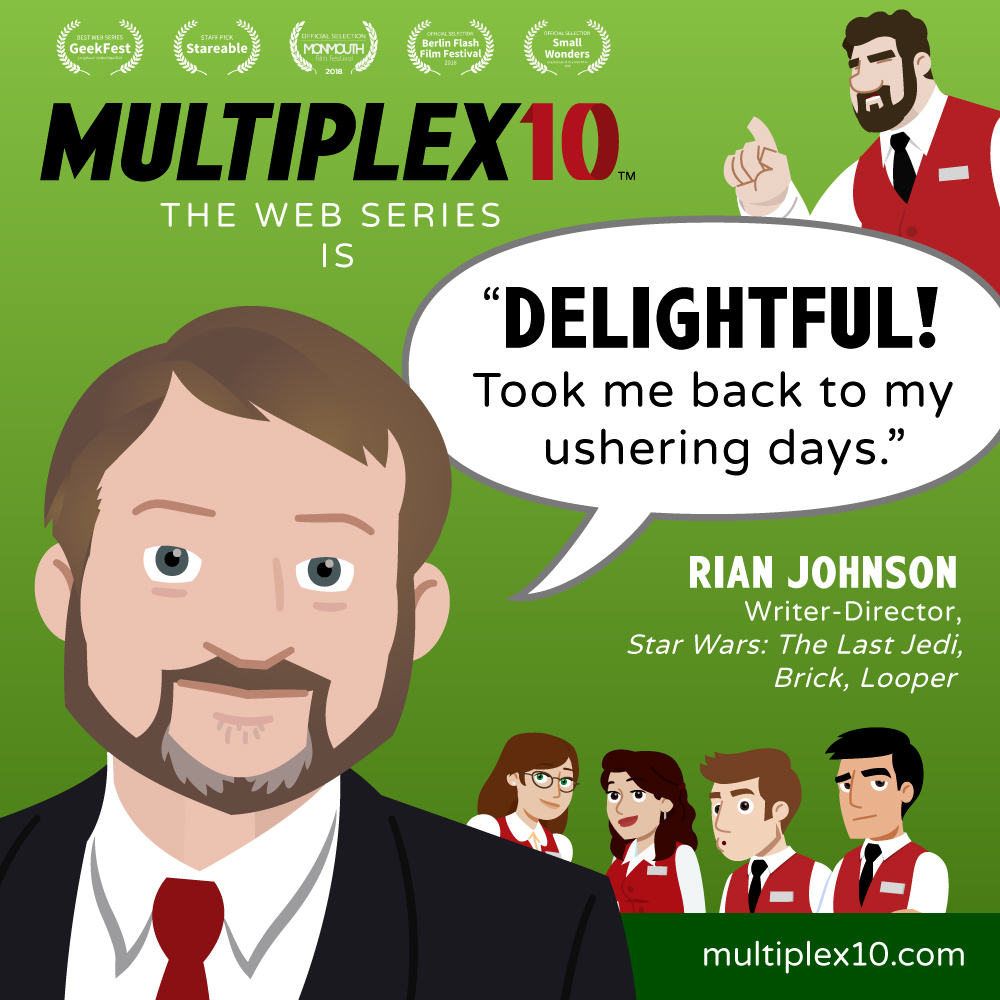 One of my favorite indie filmmakers, one Rian Johnson, had some very kind words about our little web series (which you can read for yourself above). You might have seen one or two of the movies he’s written and directed, like Brick, Looper, or maybe Star Wars: The Last Jedi?

In addition to this amazing news, the Multiplex 10 animated short was selected to screen at the upcoming Monmouth Film Festival (it’s in the Web Series category) and “Self-Help” will be screening in this year’s Small Wonders: An Exhibition of Tiny Art & Film, as well. We’re not just enormously proud of the work we’ve been doing, but I really believe we’re poised to Get Big (relatively speaking) if we can just keep up the momentum.

But we can’t do that without your help in funding the series. PLEASE help us keep making more of our “delightful” web series by backing the Multiplex 10: The Web Series Kickstarter today!

Hey, everyone. For those of you who are already familiar with Multiplex 10 or the Multiplex comic strip, we have a new name on this Kickstarter project, whom I wanted to introduce: our newest co-producer, Scott Weinberg. And for people familiar with Scott’s work but not Multiplex 10, I wanted to talk about why he was interested in joining up with us.

Scott is the co-host of the 80s All Over podcast, a programmer of the Cinepocalypse film festival (going on this week in Chicago!), a film writer, screenwriter, and film producer. And he just had Popeye’s for dinner.

GORDON: Hell yeah. So I guess first of all, tell me about your background as a film writer.

SCOTT: I started at a site called eFilmCritic (aka Hollywood Bitchslap!) and while it wasn’t a paying gig, it provided me with a chance to improve as a writer, find my voice, network with other film writers, acquire local and festival press credentials, and start building my name. Eventually someone hired me for money. I’ve written for dozens of outlets: Rotten Tomatoes, Thrillist, (and) FEARnet were the biggies.

After FEARnet died I went through a severe bout of depression. I’ve always wanted to be just a working film critic. When I was younger that was a viable career choice, but the internet sort of killed the profession (not entirely) and after FEARnet I decided to work the other side. I started writing screenplays and working on my friends’ films.

GORDON: So what were some of the early films that you worked on?

SCOTT: I worked with great filmmakers like Emily Hagins, Nacho Vigalondo, Burnie Burns, etc. Emily asked me to play a teacher in Grow Up, Tony Philips. Nacho asked me to play a film producer in Open Windows. Burnie used my voice in an episode of Red vs. Blue. And then Steven DeGennaro asked me to play “myself” in Found Footage 3D. I said yes. He promoted me to producer a few weeks later, and I worked my ass off on that movie.

And I just watched everyone on these sets (and studio). I watched the script supervisor, the FX people, the stuntman, the make-up hut, the DP, the first AD, the production assistants, etc. I just learned what these people do on a movie set, and not from reading books. From watching and asking questions. I figured if I’m going to try to be a producer I should know what all these people do. So I studied that stuff.

Steven and I became good friends. We’ve written three screenplays together (so far) and we’re hustling to get them read. Right now I’m still writing about movies online to pay the bills, and I probably still would write some stuff if I sold a screenplay or two. Oh, also there’s the podcast.

GORDON: Right. How did the 80s All Over podcast start?

SCOTT: Drew (McWeeny, co-host of 80s All Over) and I wanted to do a podcast together. I threw together five or six ideas. 80s All Over was the only one we were both enthusiastic about.

SCOTT: I think we met at a Sundance actually.

GORDON: So that brings you to me. Haha. How did you find out about Multiplex 10, and what made you want to get on board with us as a co-producer/writer? I know this, but for the sake of the interview I’ll let you tell the story.

SCOTT: (Producer Joe Dunn) RTed it into my eyeballs. I thought, “Oh, I like this, and they’re still kinda small, which means they may need some help from a lifelong movie freak who also thinks he’s funny.”

You mentioned that you might be able to use me as a voice actor, which is awesome, but I think Multiplex 10 has the potential to travel beyond YouTube. Maybe a Netflix series, maybe a feature. I think you cooked up something that could strike a chord with a lot of movie nerds.

Movie geek culture is huge. The good and the bad. I think M10 can address a lot of interesting things that cinephiles deal with. Social media, marketing, accepting other peoples’ opinions, criticizing films in a fair, non-personal way. You can deliver a lot of worthwhile messages through humor and kooky animation. Plus there are lots of ways to put the M10 nerds in all sorts of wacky situations, which is also fun.

GORDON: I abbreviate it MX10, by the way, because I always used MX for Multiplex (the comic strip that Multiplex 10 is based on). Although I guess MX could still work because X means 10 in Roman numerals but whatever.

GORDON: Yeaaahhhh. I’m not sure how much we do “wacky” in Multiplex 10. Kurt is a pretty wacky character, for sure. But Jason is… decidedly not. I think the interplay between them is the most fun (and hopefully interesting) aspect of Multiplex 10.

SCOTT: What if we send them to Comic Con? That would blow up.

SCOTT: And I want to have Kurt and Jason dealing with more horror films.

GORDON: Well, yeah. Obviously. At the base goal, the last couple of videos from this Kickstarter project would be coming out in October, after all…

A Kickstarter project to fund more episodes of the award-winning Multiplex 10: The Web Series is now funding on Kickstarter! Our show needs your help to raise $20,000 to make (at least!) ten more Multiplex 10 videos… and if we raise more than that, we’ll make even more videos!

First, watch this video with Multiplex 10 stars Kurt, Jason, and Melissa from the Multiplex 10 Cinemas covering the basics:

Ready to back Multiplex 10: The Web Series yet? No? Well, then watch THIS video of Multiplex 10 creator Gordon McAlpin getting into a little more detail:

Still need more information? Head over to the Kickstarter project page to read the long version!

Please back Multiplex 10: The Web Series today! Although the funding period ends at 10pm on July 17th, the earlier you pledge, the more it helps convince other potential backers to support the show! And even if you can’t lend us your financial support, there are other ways to help! Please consider sharing the project (and our show!) with your friends on social media to help boost our signal.

If you have ANY questions about the project, head over to the Kickstarter page, or shout at me (Gordon) through Twitter or via e-mail!

Jason and Kurt discuss Solo: A Star Wars Story, the latest and… uh… well, the latest from Lucasfilm.

A Kickstarter to fund additional episodes of Multiplex 10: The Web Series and more movie reviews will be launching in TWO WEEKS (June 25th)! Be sure to subscribe to the Multiplex 10 RSS feed, the Multiplex 10 YouTube Channel, or Gordon McAlpin’s newsletter to get notified when it launches!